Our Family’s Response to the AGG

During the Advent Conspiracy messages this season and in reading the supporting handouts and blog articles, something that struck a chord with me was the “obligation treadmill” of buying all these Christmas gifts, especially all that we collectively spend as a family on each other. And when it’s all said and done, why are we really doing this? … But how to break with family tradition, with what the kids are expecting? Here’s what our family did.

This may not fit with your family, but here’s what we tried.

I had read the “Alternative Giving Guide” (AGG) and its insert booklet from MCC. I was struck by the many varied and simple ways that a person could help. There were many options, local and beyond, listed at the back of the AGG, but what caught my attention more were the practical options offered through the small MCC booklet. Page after page of useful suggestions from providing school books or student meals, to providing basic infrastructure components to needy families and communities that would make an impact on a daily basis such as providing shovels, rakes, wheelbarrows and seeds to a group of 20 farmers. 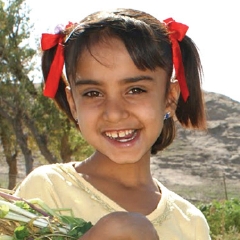 As I pondered the various suggestions, I was amazed at how far a small amount of our money from “wealthy Canada” could go and the positive impact it could have on families in other countries. As one example: When I came to the suggestions regarding drinking water, I was reminded of a trip I had taken a number of years ago to Africa. There we saw first-hand how the women walked for many kilometers every day to the distant watering hole. They rested, filled their 1, 2 or 3 jugs, and then walked all the way back, balancing the full jugs on their heads and/or suspended from a pole that was across their shoulders. They had to do this every single day. I remember seeing the water that they drank from their various watering holes and how it was a muddy consistency throughout, what we would consider very dirty water. Yet for a small donation, all managed by MCC, we could provide rain gutters and a cistern system at home to gather fresh water, or pumps and pipes to provide equipment for communities to build wells.

After more reading, it was obvious to me. I thought, “We can do this…. We need to do this.”

But what would the kids think? Would they be open to allocating a portion of the money that is spent on getting THEM presents to providing for others who have much greater needs? Would they immediately think that this was a wonderful, generous idea, or would they shun the idea as being crazy, foolish and dismiss it without another thought?

I did not want to guilt them into this, or have them agree to it if they were only agreeing because they thought that this was what I wanted them to say, or if they thought that the decision had already been made so why fight it. I wanted to honestly discuss it, ponder it, ask questions about it, and see where the discussion went after it had a chance to percolate in their minds for awhile. I wanted them to draw their own conclusions and have it “cost” them something (re their presents) so that they would also have the rewarding feeling that you get when you genuinely help someone who really needs it, and get nothing in return. And I wanted them to learn from this experience, learn about being generous and helping others, as a good life lesson. Or at least that was the theory.

Yet they are kids. I wasn’t thinking about reallocating the money for ALL of their presents. But for a portion. But what portion made sense? … I decided to let the kids participate in answering that question for themselves. But what if they didn’t want anything to do with this “crazy idea?” And I wasn’t interested in just increasing the amount spent in December so that we could give to these worthy causes as well, since I already think we spend way too much on ourselves for Christmas gifts.

We discussed it. I had two copies of the small MCC booklet for them to both look it (they don’t share things well). They really became interested in the many ways that we could help others. They really seemed drawn to specific items in the booklet even before I asked them to be specific… they started commenting on various efforts that struck them as helpful as they were reading through the booklets.

Then they asked about how much money they could give to this and if they could be involved in selecting what the money was given for. So we discussed what I was thinking about the reallocation of some of the money that we spend on Christmas gifts for each other in our immediate family. And the result was exactly as I had anticipated: the younger child thought it was a great idea, and the older child didn’t say anything. They looked away in silence.

I knew why. The older child had been telling me for about four months now, the one and only thing that they wanted for Christmas. It was an expensive electronic device that they had wanted for a long time. At every opportunity for months now, they have mentioned this to me (so I wouldn’t forget, I guess). And the cost of this device would consume the entire amount that was budgeted to be spent by me for them for Christmas, meaning that this would be the only gift that they would get from me, but that was ok with them since it was an important thing in their mind.

So now what? If even a small portion of the older child’s Christmas gift money was reallocated to any worthy cause, it would mean that they would not be getting this one device that they had been eagerly anticipating and hoping that they would get at Christmas. And they had just made this realization.

The sad look in their eyes was difficult to see. I didn’t want to break their spirit, pull the anticipation rug out from under their feet. What had I done? Why did I do this? Why am I putting them through this? What happened to the fun of giving & receiving gifts – had I forgotten about this? After all, they are just kids. How do I take it back? Maybe I am just a bad parent, over-zealous after reading a dumb, little booklet? I was no longer sure. The silence was deafening.

I could feel their pain. They didn’t want to say anything; they probably didn’t know what to say. They were so interested in the ways that we could help other people, but once the implication of the cost was realized, everything suddenly “stopped.” Now what? What do we do? We were in a bit of uncharted territory.

I excused the younger, still happy child from the room and spent some time with the older one. We talked a bit, sat a bit, talked some more. We took a break. Later we talked more about the idea and its implications. They really wanted to participate in helping others, but needed time to think about it some more. I was not going to force this — if they didn’t want to participate, then they didn’t need to.

I realize that by now it is too late to say, “To make a long story short,” but…

In the end, the older one came up with a plan for some smaller (in my opinion, more reasonable) gifts and what approximate amount of money would suffice for their own gifts. It was similar to the amount that the younger child had also chosen for their gifts. I tried to not influence how they chose to proportion the gift money budget; I wanted to see what they thought of this idea by virtue of how they allocated the money that was ear-marked for their own personal benefit (for their Christmas gifts).

I was very surprised at the amounts that the kids chose. I had no idea if they would want to spend 5-10% of their allocated gift money on this (which would be fine), or more, or zero. In the end, each chose to reallocate about 2/3rds of their gift money to these worthy causes to help other people, and to only retain about 1/3rd for gifts for themselves.

I am proud of how the kids have responded to the suggestion of rethinking how we spend so much money at Christmas for no real or beneficial purpose (e.g. on ourselves). They want to do it again next year. And I am thankful to the leadership for bringing our attention to the Advent Conspiracy and challenging us to look at how we can do things differently, ultimately benefiting ourselves and others.

This article is not really about our family, which is why names are not mentioned in the story. The article is about the ideas and concepts that our family found helpful to reconsider and that we are now happy that we struggled with. Maybe we have come up with what might become our “new normal” for how we view family gifts at Christmas. Who knows. We’ll see next year.