As you know our missions trip was to help finish building a church that was started three years ago… But that wasn’t our only goal.  My main reason for this trip is to outreach to the children and mothers of this community.

On Tuesday, our first day at the church I had an instant connection with two little boys; Jeffrey (8 yrs old) and Emanuel (3yrs old). The moment that I walked in Jeffrey greeted me with an infectious smile and Emanuel came to me and grabbed my hand.  My heart melted.  This confirmed why I am here. 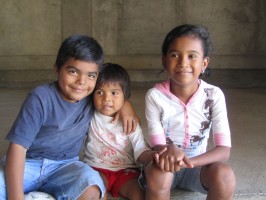 Yesterday morning we had a bit of quiet time and I asked Jeffrey if Flor was his Mama.  He confirmed yes.  Flor was standing around and she confirmed that Emanuel was also her son.  Flor is a member of this church for the past 7 years.  She was very recently laid off from her job as a domestic servant.  The church knew of her situation and asked if she would assist in making our lunches for us daily, and she agreed.

I called Elsie over (our translator) to assist me in talking with Flor.  I was curious about this woman.  To have such warm, loving, friendly boys they must have learnt it from their parents.  I told Flor she has wonderful boys and that they come from a wonderful mom.  She started to tear up.  I didn’t quiet understand why and I later soon found out.  We had a long talk, Flor, Elsie and myself. Language was no barrier between us moms …… obviously with the help of Elsie: )

The following is Flor’s life story …. Our fellow sister.  I feel it is important to share this with you in understanding how our team is impacting the relationships with our fellow brothers and sisters:

Flor was married to her husband.  Her husband was physically abusing Flor when Jeffrey was a baby.  Jeffrey would cry and cry during those periods of abuse.  At the early stage, Flor wasn’t a Christian.  She didn’t know what to do.  She admitted that life was hard and she thought many times of suicide for herself along with taking Jeffrey with her.  She thought that would be better than what she was going through on a regular basis.  This was going on for some time.

Flor then came to God.  She welcomed Him into her life and realized those thoughts were wrong.  She started attending church here and this became her family.   By this time she was pregnant with Emanuel.  The abuse in her life was still ongoing.  Jeffrey was getting older and now was watching.  She feared for his life now too.  She and Jeffrey left their home and came to the church as they had nowhere to go.  The Pastor allowed her to ‘live’ at the church on a temporary basis until she got her feet on the ground.  As you remember, this church was built approx 3 yrs ago and Emanuel is now 3yrs old.  This church was only partially built and this mom and child were living in that condition.  It was safer than living with her husband.

She was able to find a job as a domestic servant to support her boys.  She says that Jeffrey tells her how ‘proud’ he is of his mom since he knows she works hard to support him and his younger brother….. Imagine an 8 yr old boy understanding and seeing a parent struggle daily to provide just the basic shelter, food and safety for her young family.  I struggled holding back my tears… 8 yrs old.   He is so young to have such a mature outlook on life.  Our young kids worry about what TV show to watch, the latest IPOD game to download or what the recent fashion is to keep up with their peers.

I asked Flor what she will do to support her family as she was recently laid off from work. She is hoping to wash laundry for others to raise enough money to pay for rent and food.  She is renting a place along with another woman.  I didn’t bear to ask how many kids she has.

We shared a few ‘gifts’ with Flor and her boys.  We gave Emanuel a ‘teddy bear’ and a Sponge Bob t-shirt.  He hugged his bear.  Flor was teary eyed.  She said that this teddy bear was not only his 1st teddy bear but his 1st toy….. Imagine, a 3yrs old with never having a toy.  As I watched Emanuel with his bear, his instinct was to take care of it.  He carefully placed the bear between his legs and he was taking his shirt and was ‘wrapping’ it around the bear.  He started to get frustrated.  I didn’t understand. He was talking to me and I had to get Elsy to translate.  He was trying to put his new shirt on his bear.  His teddy bear didn’t have a shirt.  Again, this child didn’t have anything and was given two items:  a bear and a shirt.  At 3yrs old, he was ‘giving his shirt’ away to his bear.  This confirmed how the culture down here is so different than ours. They have so little but are content with what they have.  They don’t know any different.  At 3yrs old, this child understands the concept of helping others even if it is a teddy bear.

Jeffrey received a baseball glove, a ball and a shirt.  His eyes widened so much and his smile…. oh his smile is engraved in my heart.  Again Flor was teary.   She said that back in December Jeffrey asked for a ball glove and she had to say no to him.  She couldn’t afford it.  Of all items that we gave Jeffrey it was a ball glove.  We didn’t know that was what he wanted, but God did.  We told Jeffrey that he had to put his glove away before the other children arrived.  He hated to part with it.  He had a few more minutes of play time and reluctantly put it away for another time.

Jeffrey and Emanuel are not the only children with us in the mornings but also a 10 yr old girl named Reina.  At first I thought she was Flor’s daughter, but she wasn’t.  Maybe the pastor’s daughter, but she wasn’t.  Who did she belong to???   Reina shared her story with us.  She currently lives with her grandparents.  Her mom is scheduled to come home to see her within the next month.  She hasn’t seen her mom for 3yrs.  Imagine, at 10yrs old not seeing your parents.  I didn’t have the heart to ask about her dad.  I didn’t know if my heart could hear it.  As Reina spoke, there were no tears.  She spoke as a matter of fact.  Elsie later told me that this is a norm for many kids here in Nicaragua.  Parents may need to travel away to other cities or countries to find jobs to support their children.  In the meantime, the children live with grandparents, aunts, uncles or other family members.  Reina received a dress yesterday and she was so thrilled.  She asked if there was going to be a children’s program on Sunday.  We had to tell her no but we will be attending their service on Sunday morning.  She said that she will wear her new dress to church on Sunday….. I can’t wait to see her in it!!

Sorry this is soooooo long.  I really tried hard to condense it, honestly.  I just want to let you know that all your commitment to this missions trip is truly making a difference.  We could not have accomplished this trip without you.  Even though you may not be here, we definitely feel your prayers.

This morning Josh came running up to me.  He watched Flor and the boys come walking into church ….with the teddy bear in tow.  What better way to start off the morning – smiling.