Conversation that occurred between me and another church member at the Westheights corn roast in September: 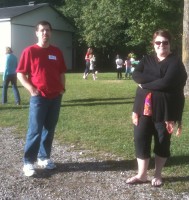 A year ago, I went to my first Westheights corn roast. I’d only been attending church for a little more than a month and I knew all of two people there. My coworker (one of the two familiar faces) had suggested I talk a little bit with her friend about the journey I was on, that fateful journey to Jesus. I was in a space where I felt like I needed to have every little detail worked out in my mind before I could make a decision about which path to follow and whether or not I believed. I did have an opportunity to talk to her that night, and she was so helpful – she reminded me that I didn’t have to have it all worked out right away, that most people don’t and many don’t EVER get it all worked out, that it’s a journey, that my thoughts and opinions and convictions would continue to evolve for the rest of my life, and that it was more than okay. That conversation was a great help in clearing up some of my confusion, and I made the decision to follow Jesus less than a month later.

I started thinking that night at the event about how much can change in a year. It’s certainly been a year of major change for me: I’ve had two new jobs, my husband and I separated, and I’ve moved twice. But perhaps the biggest change is the community I’ve found.

I moved back to Kitchener after university in the spring of 2008 and quickly discovered that it wasn’t as I had left it. The majority of my friends no longer lived here. The people I used to see and the places I used to go were no longer really a part of my life. I was busy with a new job, a new relationship, and settling back into life with my family, so I don’t think I noticed it very much at first. But in the fall, as my relationship ended and the newness of having moved wore off, I began to feel lonely. And I began to seek out places and ways to meet new people, find friends, get involved.

Google gave me a bunch of ideas. Join a book club, join a choir, join a gym. I was already a member at a gym but I’ve never found that a terrific place to meet people because everyone is naturally so self-focused while they’re there. I have an okay voice, I could join a choir… but I was taught to play the piano years ago by the Suzuki method, so my knowledge of reading sheet music is not great. I can squeak by, but barely, and certainly not enough to be able to easily sight read. So I thought I’d try the book club. I found one that was just starting up, and funnily enough knew one of the women in it, but it fizzled out after a few months because none of us were reading the books on time and we couldn’t get it together.

The other suggestion Google made was to join a church. I resisted because I had no faith, until one day I took this funny quiz online about what religion one should follow, and it told me I should be a Unitarian Universalist. I looked it up, found it to be kind of neat, and discovered that there was a Unitarian church in town. I attended once, found the people quite nice and mostly friendly, but didn’t really feel like I fit in.

So when I turned to my coworker one day last year and told her I’d been thinking about God, and she encouraged me to start coming to Westheights, I figured I had nothing to lose.

As it turned out, I had everything to gain.

Here’s what I’ve learned about community in the last year:

It’s a place where no matter where you are in your personal life, there are people who care about you, who greet you enthusiastically and ask, genuinely interested, how you are, where you’re living and working, and what’s new in your life. They invite you to events, they reminisce with you about the last year and how it was exactly a year ago that they met you. They wrap a blanket around your shoulders when you didn’t dress warmly enough for the chilly September evening and are cold.

At the Westheights women’s retreat this past May, I reflected that if anyone had told me a year before that I would attend a church retreat, I would have told them they were nuts. But how lucky am I, to have found a place where I feel I might actually belong?

I’ve been feeling a lot lately like the life I’m living right now isn’t the one I had planned for, or the one I thought I’d have. But that Saturday night at the corn roast, being among friends – friends found in (for me) the least likely of places – made me think. This might not be the life I had planned. But maybe it is the one I was meant to have.

And maybe, just maybe, it’s the one I really wanted all along.