Our condolences to Meg Slater on the passing of her brother, Lorne Davis, this past Monday. We pray for God’s comfort and peace for the Davis family and Meg during their time of mourning. 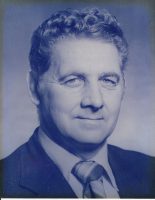 It is with sadness, we announce the passing of Lorne Davis, peacefully at Tranquility Place, Brantford on Monday, February 18th, 2013 in his 85th year. Loving husband for 43 years of the late Anne Smith Davis (nee Waters, 1993). Devoted father of Barbara and Jim Fox of Kitchener, Diane and Laurie Haney of Mount Pleaseant and Roger and Beth Davis of Brant County. Predeceased by daughter and son-in-law, Sandra (2002) and John Thistle (2008). Dear grandfather of Jeff and Lisa Fox, Brent and Vilaylack Fox, Mark Fox, Jennifer and Duncan Routledge, Ian and Shannon Haney, Caroline and Neil Howard, Katherine and Kevin Steele, Stephanie Thistle, Ted and Nicole Davis, Michelle Davis and Angela Davis. Proud great-grandfather of Adam, Nathan and Norah Fox, Liam Routledge, Lillian Howard, Sawyer, Sean and Reese Steele. Affectionate and cherished companion of Joyce McGovern of Brantford. Will be sadly missed by his brother and sister-in-law Roger and Edith Davis of Burford and his sister Margaret Slater of Kitchener. Lorne was raised on Cedar Dell Farm located in the Bethel Community. Lorne was a long-time Brantford businessman, owning and operating Davis Motor Service for 28 years. He enjoyed flying out of the Brantford Airport and was an active member and past President of the Brantford Flying Club. An avid collector of antique and classic cars, Lorne was a long-time member of the Long Point Region of the Historical Automobile Society of Canada. Upon retirement, Lorne became a member of the Brantford Probus Club. Lorne was an avid outdoorsman, enjoying hunting and fishing with his family and friends. The family will receive friends at the DENNIS TOLL FUNERAL HOME, 55 Charing Cross Street, Brantford on Friday, February 22nd, 2013 from 2-4 and 7-9 p.m. A Memorial Service will be held on Saturday, February 23rd, 2013 at 3:00 p.m. in the funeral home chapel. Cremation has taken place. Donations in memory of Lorne may be made to the charity of your choice.