The sixth statement Jesus made at the cross was a statement of Victory. All throughout history there have been great statements of victory – when sports games have won, when people have accomlished great feats, or great technological challenges have been achieved. This sermon message was on the greatest statement of victory ever spoken. It’s only three words in the English language: “It is finished.”

SEVEN WORDS FROM THE CROSS

THE WORD OF VICTORY 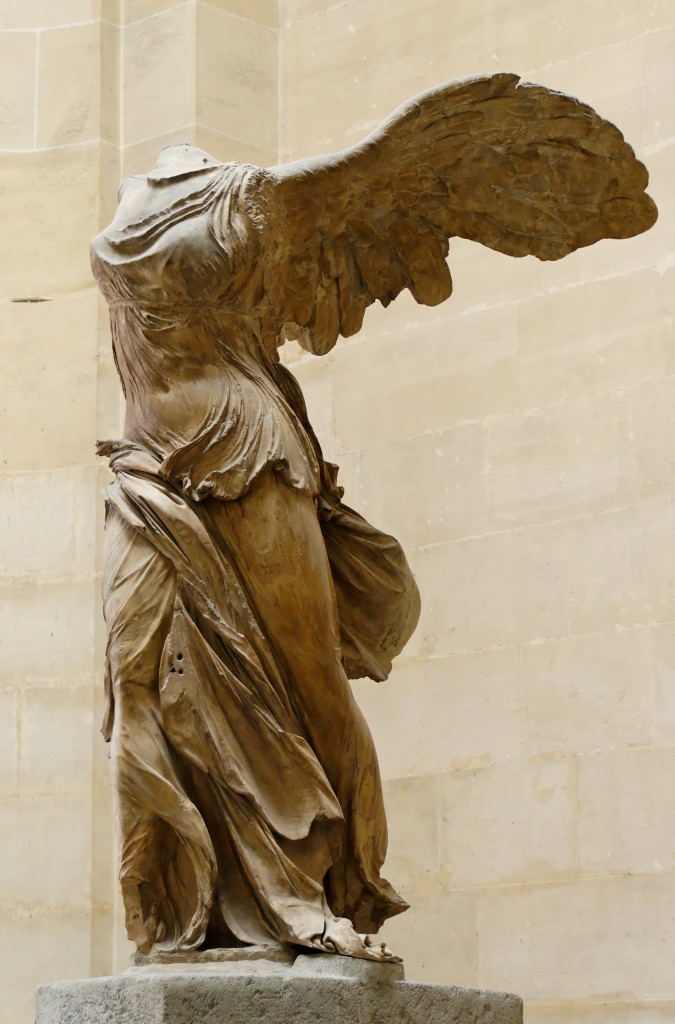 Winged Victory of Samothrace, The Louvre

John 19:28-30 Jesus knew that His mission was now finished, and to fulfill Scripture He said, “I am thirsty.” A jar of sour wine was sitting there, so they soaked a sponge in it, put it on a hyssop branch, and held it up to His lips. When Jesus had tasted it, He said, “It is finished!” Then He bowed His head and released His spirit.

John 4:34 Then Jesus explained: “My nourishment comes from doing the will of God, who sent me, and from finishing His work.”

WHAT DID JESUS ACCOMPLISH ON THE CROSS?

1. HE FULFILLED THE SCRIPTURE

Luke 24:44-47 Then He said, “When I was with you before, I told you that everything written about me in the law of Moses and the prophets and in the Psalms must be fulfilled.” Then He opened their minds to understand the Scriptures. And He said, “Yes, it was written long ago that the Messiah would suffer and die and rise from the dead on the third day. It was also written that this message would be proclaimed in the authority of His name to all the nations, beginning in Jerusalem: ‘There is forgiveness of sins for all who repent.’”

2. HE SATISFIED THE LAW

Romans 8:3-4 The law of Moses was unable to save us because of the weakness of our sinful nature. So God did what the law could not do. He sent His own Son in a body like the bodies we sinners have. And in that body God declared an end to sin’s control over us by giving His Son as a sacrifice for our sins. He did this so that the just requirement of the law would be fully satisfied for us, who no longer follow our sinful nature but instead follow the Spirit.

Colossians 2:14 He canceled the record of the charges against us and took it away by nailing it to the cross.

Romans 10:4 For Christ has already accomplished the purpose for which the law was given. As a result, all who believe in Him are made right with God.

3. HE PAID MY PENALTY

Colossians 1:14 “…who purchased our freedom and forgave our sins.”

Hebrews 7:27 But Jesus did this once for all when He offered Himself as the sacrifice for the people’s sins.

Hebrews 10:18 And when sins have been forgiven, there is no need to offer any more sacrifices.

4. HE CONQUERED SIN AND DEATH

Romans 5:17 For the sin of this one man, Adam, caused death to rule over many. But even greater is God’s wonderful grace and His gift of righteousness, for all who receive it will live in triumph over sin and death through this one man, Jesus Christ.

Romans 6:10 When He died, He died once to break the power of sin. But now that He lives, He lives for the glory of God.

Romans 6:4 For we died and were buried with Christ by baptism. And just as Christ was raised from the dead by the glorious power of the Father, now we also may live new lives.

5. HE DEFEATED THE DEVIL

Colossians 2:15 In this way, He disarmed the spiritual rulers and authorities. He shamed them publicly by his victory over them on the cross.

Colossians 1:13 For He has rescued us from the kingdom of darkness and transferred us into the Kingdom of his dear Son.

Acts 20:24 But my life is worth nothing to me unless I use it for finishing the work assigned me by the Lord Jesus—the work of telling others the Good News about the wonderful grace of God.