As we sat in the Papa John’s pizza restaurant at 8:30 pm for dinner, we ordered our pizza, two family size pizzas for nine people.  I looked around and each team member had a glazed look in their eyes and conversation was at a minimum.  Our drink order was delayed which only seemed to lessen the enthusiasm as the dusty conditions of the rural back roads had left us parched and eagerly awaiting the pitchers of orange pop and Coca-Cola.  It was painfully obvious … everyone was exhausted, it had been a really long day.

Breakfast was wonderful and the Nicaraguan coffee was excellent as always.  As we gathered in the commons area to eat our breakfast everyone was chipper and good morning greetings included the common courtesies like, “Are you ready for day?”  Responses were chipper from all.  We were excited about our second day at the work site and our second church where we would offer a children’s ministry.  As we finished our breakfast each of us gathered our personal items and got ready to load the van for the half hour drive to the San Antonio work site.  I could see the team was excited and there were lots of laughs all around as we did disservice to the Spanish language (I more than anyone else). 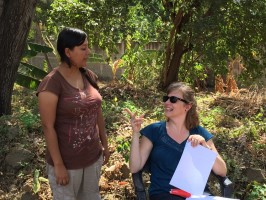 Another cause for excitement was the news that Elsy was arriving today.  Elsy has been our translator on all of our previous trips to Nicaragua.  She is a beautiful Christian woman from the BIC church in Ticuantepe.  She has become a wonderful friend and a highlight of our trips to Nicaragua.  She was joining us late due to the fact that she was defending her thesis on Wednesday at the university in Managua.  We were all excited when the news came to the team that Elsy had successfully passed her program and was now officially a physiotherapist.  We were excited to see her when she arrived at the work site in San Antonio Sur.  Sherry brought Elsy up to speed and the women began to prepare the kids’ program for later that day.

On our first day, our work responsibilities were uncertain but we did what we could to help by digging some holes for the posts for the shed that is being built on the property.  Today we got some clearer direction about what needed to be done.  This is the same general area that we spent so much time digging in last year.  We were told that it needed to be dug back another metre further.  We laughed and made some jokes about the guys from last year (Roy, Ryan, Rudy, Terry) and how it was now our job to finish up their work.

We began to dig and move the dirt to the other side of the property.  Even by Nicaraguan standards it was a hot day and our digging area is right out in the open sun, no shade to be found.  We dug all morning and made a significant dent in the huge pile of dirt that needs to be moved.  We even had time for some fun.

Lunch was delayed but it was certainly worth the wait as it was a spiced beef with rice and plantain.  After lunch things moved slowly as we finally got expectations cleared up for the children’s ministry later in the afternoon.   We headed off to our hotel to clean up and pick up supplies.  On the way we made a stop for some snacks and additional last minute supplies for the kids program.  By the time we got back to the hotel, it left everyone with just enough time for a very quick shower (or swim) and then we packed up all of the gift bags and supplies for the kids program.

The plan was to meet the pastor from the church that we were visiting at a designated spot along the highway and he would direct us to the La Ceibeita 2 church.  When we arrived at the designated spot the pastor was not there.  Some phone calls were made and we drove around for a while trying to find the church but we were not successful.  Eventually the president of the BIC church in Nicaragua came to our rescue.  He met up with us and we followed his car to the church.  (If this seems difficult, keep in mind that there are no street signs anywhere so it is not simply a matter of looking up an address in a GPS or on a map.  Finding a new location in a rural area, even for locals, is a certain adventure on its own).

We were late arriving at the church but it seemed to work out fine as most of the kids straggled in after we began the program.  The kids were well behaved and the program went very well.  The program ended at 5:40 pm and their church service was scheduled to begin at 6:00 pm.  Everyone grabbed a cold drink and we got ready for the church service.  The church service was great as the Christians in Nicaragua really like to sing and they like their music loud.  The pastor spoke on the story of Gideon and his 300 soldiers.  It was inspiring and he was passionate about his message.  With translation and all of the singers and speakers involved in the service it meant that the church service was two hours long.  Finally we packed into the van and headed out for dinner.  By the time we got to Papa John’s it was 8:30 pm and everyone was hungry tired and thirsty.  It has been a long day and a great day. Street in front of the church Pastor and his wife Melanie waiting for her cue