April 16, 2018 — An update on our pastoral search process was given at last month’s Annual General Meeting (AGM) covering the period of Sep 2017 through Mar 2018. If you weren’t at the AGM, here is a mini-update of the last few months’ efforts by the Pastoral Committee, followed by the most recent development. Below is a timeline. 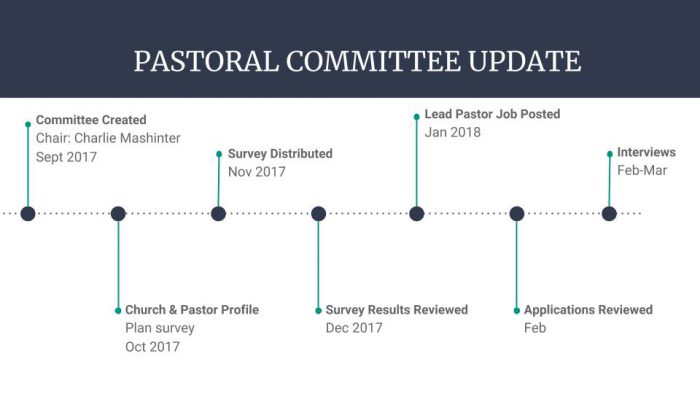 In January, the Lead Pastor position was posted. Of the eight applications we received, we narrowed the selection down to four individuals who we felt were the most appropriate fit for Westheights Church. From there, we analyzed their resumes, pastoral profiles and sermon podcasts.

We interviewed three of these candidates and then met for a discernment meeting to determine if we wanted to offer a second interview (normal practice) to any of the interviewees.

As a result, we will be having a second interview with one of the candidates in the second half of April.

We ask the congregation’s prayerful support as we continue the search for Westheights Church’s next Lead Pastor who we believe the Lord has already selected for us.