Podcast of Religion in Canada Seminar with Joel Thiessen We were recently privileged to have Joel Thiessen come and speak at Westheights. With his wealth of research and data, his clear and concise delivery of information was surprising, super-manageable and understandable, and compelling.

Joel Thiessen is a sociologist of religion who specializes in religion in Canada. He obtained his MA and PhD at the University of Waterloo before heading to Calgary where he serves as Professor of Sociology at Ambrose University, and is passionate about learning and excellence, from the classroom instructing students, to the research field gathering data, to consulting settings bridging sociological knowledge with ‘real world’ concerns. 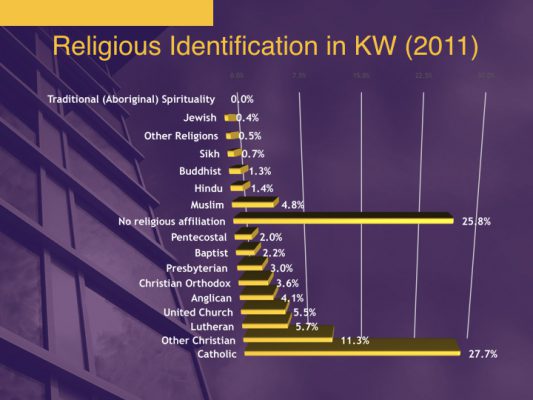 We learned about the roughly 25% of our neighbours who would check the “none” box when being asked about their religious affiliation:

The perception is that religious groups do not create the space for the kind of values they hold dear to their heart.- Dr. Joel Thiessen

WHY DECREASED INVOLVEMENT IN CHURCH?

ATTITUDES TOWARDS SOCIAL GROUPS AMONG NONES

If we are having this conversation about why people are leaving the church, I would say, sociologically, a poor starting point is having negative feelings about the group of people who are least like you. – Dr. Joel Thiessen

In a survey of people who previously attended church, when asked “to what extent do you agree or disagree with the following: I want to become more involved with a religious group in the future.”

Parents who model and instruct and engage in dialogue with their children about faith within their home have the greatest chance of their children continuing to be actively involved in that religion in their adult years.-Dr. Joel Thiessen

Together we learned to listen well, to build friendships with no strings attached, to prioritize faith development at home, to look outward in our ministry and get involved in our neighbourhoods, and see ourselves as missionaries in Canada.

Thanks to Dr. Joel Thiessen for teaching us and challenging us!

For more information, go to https://www.flourishingcongregations.org/