One of the things that strikes me over and over again about life in Nicaragua is that they seem to take so many more life-threatening risks than we do.  On our first bus ride through Managua, we saw fruit sellers standing in the middle of the road, between two lanes of fast-moving traffic, waiting for a red light so they could start selling.  We saw a man pass us on a motorcycle with a small child, probably less than four years old, sitting in front of him.  We see whole families driving along on a single bicycle together — no helmets and, apparently, no worries.

Even at the church we see the same kind of things.  In Canada, if we were doing a major building project on the second storey, we’d cordon off the building, but in Nicaragua we are holding a kid’s club downstairs.  (When we are pouring concrete over the front doors, we try to send someone down to keep the kids from coming in and out, but it is the Canadians who have to remember.  It just isn’t an issue for the local workers.)  And you should see their electrical tools.  The cords and outlets are cracked and broken.  At the worst parts, they tie plastic bags around the exposed wires.

These things really stand out in my mind because they seem so unsafe.  However, I do lots of dangerous things too — it is just that I’m used to doing them.  Every time I drive on the highway, I’m taking a risk.  I just don’t think of it because I’m used to it.

I think that we fool ourselves into believing that our lives are safe.  We want to believe that we have enough control to keep ourselves and our families from danger.  But, if we’re honest, we have to admit that we aren’t in control at all and that our lives could completely change at any time.  Sure we run fewer risks than our friends in Nicaragua, but that’s not the same as living risk free.

I have come to realize that I feel closest to God when I understand that I am not in control of my life.  So much of the time, I live with the illusion that I’m in control, but when I recognize my dependence on God, it is easier to rely on Him and be more deeply thankful to Him.

From the beginning this trip has helped me to see this.  Leaving the kids behind while we flew into another culture was a step of faith for us, trusting that God would take care of us and our kids.  Each day I’m praying that God will help me to continue to learn this lesson and continue to live it out after I return.

Postscript:  We just returned from a great day at the beach and a pizza dinner while watching the Superbowl.  At the beach, the waves were great.  A few of us spent a long time in the surf riding the waves.  Occasionally a big one would pick me up and cartwheel me along.  I guess I was running a risk myself.  But it was a lot of fun. 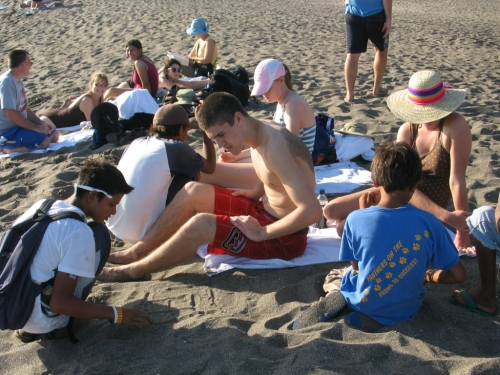 Relaxing on a beach in Nicaragua