Hello Westheights Community Church, we just finished our first day back to work after the weekend it was wonderful to see the children’s smiling faces again, but it was nice to have the weekend off.

Saturday we went in a crowded bus on a 45 minute drive to the volcanoes. The drive itself was a great experience being able to see more of the country Nicaragua. There were small farms and shacks scattered throughout the area. We found out that there is a community well and the people carry there water back to their homes. We saw herds of cattle being driven by a man on foot, oxen pulling carts, people riding bicycles, motor bikes, and walking. If we met a car on the road the drivers had to get out and discuss who was going to move so the cars could get by. We also passed by a school which the children have to walk to and from everyday. 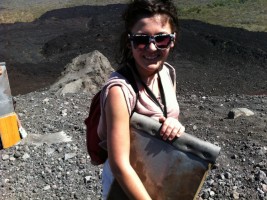 We arrived at the volcano and all signed in and then we made our way to the bottom of the volcano to begin our hike. Everyone who was doing the sand boarding got their equipment and board they had to carry the entire time. We started our hike and not too far in Marg decided to go back and stay in the shade because the hike would have been too strenuous for her; she made a very good decision it was a hard hike to the top. Todd and Karl were nice enough to walk her back to the start and she was given a rocking chair to sit in the shade while she waited for the rest of us. She said there was a beautiful breeze and she was very comfortable. Todd and karl caught up to the rest of the group while we were having a rest so they didn’t get much of a rest. We continued up the volcano and as we got higher it got windier. We stopped for a few breaks every so often on the way up. When we got to the top we stopped to see the amazing view and take lots of pictures! You could see so much from the top; it was lovely. To get down some walked and the brave ones sand-boarded down. They were fully equipped with elbow pads, knee pads, gloves, wrist guards, goggles, and green and yellow suits! We sat on our boards and slid all the way down some going faster than others, and some had a few tumbles on the way down. Everyone was so dirty after the hike and the sand-boarding we were all looking forward to going back to the hotel to shower! We had a quiet afternoon, some stayed in and rested and some went out for a walk. After dinner we had church where we go everyday to work.

Sunday morning we got to sleep in a bit longer than normal which was nice. We had church at 10:00 a.m. After church we took a trip to the supermarket to get snacks for the beach! After lunch around 2:00 p.m. we headed for the ocean. We had a great afternoon there. The waves were very big and there was a strong undertow so we had to be very careful. That didn’t stop people from going in the water they all had lots of fun playing in the waves. We just sat and relaxed on the beach for a couple of hours and a little later we got a beach volleyball game going. A few others from the beach joined in our game, it was a lot of fun. We returned back to the hotel and showered and refreshed ourselves for dinner. We went to a pizza place for dinner and watched the super bowl. We got 5 large pizzas and had lots left over. It was a really good meal and a nice change. Everyone was very tired from the long day at the beach, we all came back to the hotel and had a quiet night and collapsed into bed.  We will be ready for another busy week!