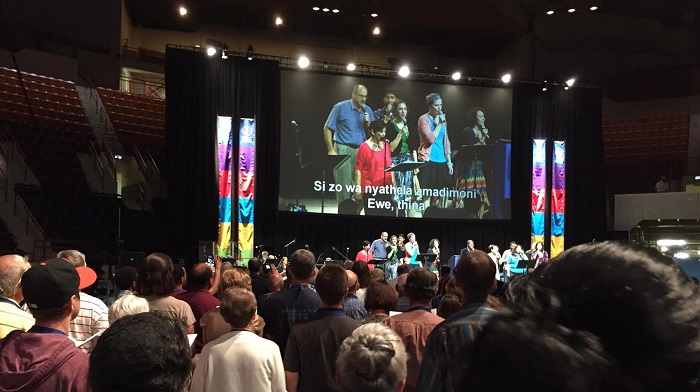 What a day it has been, of extraordinary impressions and experiences I will not soon forget. Tonight’s Worship Service, was–as Isabel Phiri, of the World Council of Churches put it–“a clear symbol of unity” between Mennonites/Anabaptists within the body of Christ. We entered the arena to the rich a capella vocals of the Brethren Choral Sounds Choir from Zimbabwe–and were hooked! Several thousand delegates and attendees sang of simple truths in African languages we did not know, with conviction and joy…Danced and swayed to those compelling African rhythms! How could we not join in, with an international worship team–most of whom had clearly had to learn these songs too–singing and moving for all their worth? (Yes, even the Westheights staff were groovin’!)

I was and have been especially moved by the Ecumenical Greetings offered at each service by representatives of various groups and denominations. Tonight a representative of the Lutheran World Federation described how only 5 years ago, Lutherans asked for forgiveness for the violent persecution of Anabaptists in the 16th century, and the 2 groups were reconciled in a service of repentance and forgiveness. He spoke with such conviction about the spirit of unity that he has both seen and prays for, as the 2 groups now work together for kingdom purposes! I was struck by the certainty that only God could bring about this kind of healing and restoration. And how He must long for unity and wholeness among his children.

The evening finished with a speaker from the DR Congo, who exhorted us–with great fervour and passion–to walk towards “the other” with a spirit of reconciliation. In my own words: to shake the chip off my shoulder, to recognize what the outcome will be if I don’t, to switch out of “stand by mode,” to humble myself and take the necessary risk.

Today’s theme of Conflict and Reconciliation spoke to me personally as a leader, and as a follower of Christ. In a broader way, this WMC experience is helping me to deeply appreciate Anabaptism and what it looks like lived out (in its many forms, and among both friends and strangers). I am grateful to witness the deep sense of respect, love and connection between many people from all over the world who don’t necessarily know each other, but who are praying for each other, and cheering each other on. Today I got a hug from a new friend from the Philippines, and I’m a bit surprised at myself for looking forward to–for being actually excited for–our group time when she and I (and others from Canada, France, the Philippines, Switzerland and India) will get to talk together again.

I’ve heard some say that that’s what WMC is really all about.